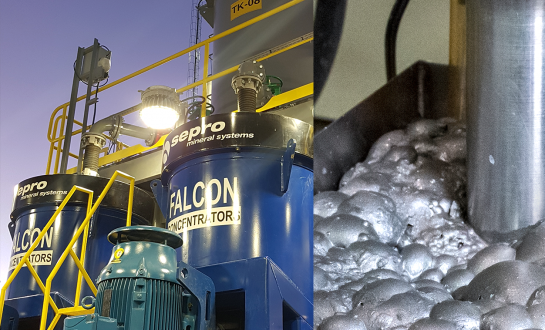 Now let’s have a look at gold recovery from flotation circuits. The most common installation is here in the primary milling circuit. And the best way to describe the benefit here – or what it’s doing economically in the circuit – is, let’s say you have a large gold particle. And just for example, let’s say you’re lucky and you’ve got particles that are greater than 500 microns in at least one dimension here: these are going to be, because of the high density, high specific gravity of gold, these are going to very likely sink in a flotation cell, and it would require a heroic amount of flotation effort to get this to the top of the cell among smaller mineral particles. And even if a flotation cell is not operating completely effectively, or let’s just say this particle finds itself near the wall of the flotation cell or somewhere where the kinetics aren’t as good.

This doesn’t necessarily need to be – one, it doesn’t necessarily need to be 500 micron. This could be much smaller than this. And the other argument here is it doesn’t take many large particles to account for a significant amount of the gold value. You might be seeing free gold incoming to the circuit. So as we mentioned before, you’ve got the circulating load building up. So, one, is you want to get these out of the circulating load, but two is, eventually, if they do make it over into the flotation circuit, you want to make sure that they’re not making it to the flotation circuit so that you don’t have this kind of heavy sinking effect. You can talk to a lot of operators and they’ll tell you that, if you’ve got a meaningful amount of free gold and you’re shovelling out a flotation cell for periodic maintenance or whatever, this is going to be some pretty high-value material.

That’s why there’s a strong benefit in the primary milling circuit and more so, as we saw earlier in this paper, more of a benefit than in a cyanidation plant, because if you have a cyanidation plant, the cyanide is going to progressively dissolve these larger particles. Maybe it doesn’t get all the way there and you lose a little bit of gold, but that’s a result to a degree of recovery, whereas in a flotation cell, this is going to be very binary. I mean, if this thing sinks, you recover zero of it as opposed in a cyanidation plant where maybe you’ve recovered 50% or 70% of the particle before it moves out of the leach train. But here, you’re losing the entire particle. So that’s why there’s a stronger economic benefit to having gravity recovery in a flotation plant, and the best place is right away ahead of the flotation cells and the primary milling circuit.

Moving on to the regrind circuit: here it’s a similar effect on a smaller scale where you’re liberating – you’ve got a particle, that’s probably locked, it’s got some target mineral in it, and it’s got a free gold component. This then gets broken apart and you’ve got the same situation where in the regrind mill because the cut size is finer, this particle is going to be preferentially retained in the circuit. And this is an easy thing to check. You’re just looking at the gold grade differential between the recirculating load in the cyclone overflow. And if you’re seeing an upgrade there, then it does mean that there’s a good opportunity to recover these free gold particles that are being liberated.

And you probably have a similar effect here, but on a smaller scale where the flotation chemistry is different, you’re trying to be more selective, so smaller particles in the regrind flotation circuit are more likely to sink to the bottom. And you also have a component of this other effect, scalping gold from concentrate products, where if – let’s just say you’re in a polymetallic mill and you’re producing a lead or zinc con, and you’re not going to get paid at all for the gold particles that are in that concentrate. You’re going to want to pull those out to try to realize some value from it. So this speaks to getting it out in the regrind circuit. And this is just, I’d say more of an extreme case where if there isn’t a regrind application like maybe there’s still an opportunity to scalp that gold out if you’re not going to get paid for it when you’re selling the whatever concentrates you’re producing.

If you found this video interesting, please visit minerals.seprosystems.com to find the extended video series, as well as additional shorter clips, addressing specific points around gold recovery for milling circuits. Thanks very much for watching.

For more information on gravity concentrators, don’t hesitate to contact our team.