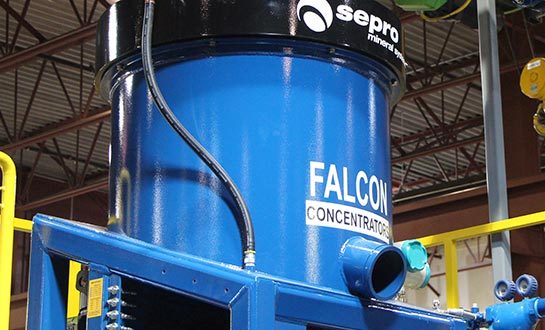 Sepro’s Falcon Gravity Concentrators are effective high G-force mineral processing equipment that improves the efficiency of fine mineral recovery for a wide range of industries. Our investment into R&D enabled us to manufacture three types of gravity concentrators, each with a unique purpose. But how do Sepro gravity concentrators stack up against similar pieces of equipment in the industry?

The development of fluidized gold centrifuges has a rich history, starting in Australia in the 1930’s. However, the equipment was not popularized until the development of the Knelson™ and Falcon concentrators in the 1980’s.

The Knelson™ concentrator consists of an inclined, constant-angle bowl wall and fluidized riffles along the entire height of the bowl – a design that has been largely unchanged since the initial development.

The Falcon concentrator began as a near-vertical, smooth-walled bowl that was specifically designed for fine gold recovery. The Falcon SB Gravity Concentrator evolved into a design consisting of an inclined, smooth-walled separation zone followed by a vertical recovery zone with fluidized riffles. These differences in bowl geometry result in a significantly different mechanism of concentration between the two centrifuges.

When a mineral slurry is subjected to a centrifugal field it forms a natural angle of repose based on the slurry density (the relative amount of water and solids) and the particle size distribution in the slurry. We call this the “dynamic slurry face.”

The overall bowl angle of the Knelson™ concentrator is approximately 13 degrees from vertical. Because this angle is shallower than the dynamic slurry face, the slurry can freely exit and there is no slurry face created in the bowl.

Like the riffles in a sluice box, the Knelson™ riffles create small eddy currents as the slurry falls over each riffle. These eddy currents disturb the bed of material and help to preferentially recover heavy particles over light particles. Having many of these riffles gives the particles many opportunities to be recovered as the slurry travels up the bowl wall.

The lower section of the bowl allows particles to smoothly stratify by density as they move up the wall. Heavier particles are pushed outwards, creating a high-grade zone of particles closer to the bowl wall. These high-grade particles are then captured in the fluidized riffles in the upper section of the bowl. Because the upper section is vertical, the riffles are behind the dynamic slurry face and no turbulent eddy currents are created. This is just the tip of the iceberg when it comes to comparing both of these great pieces of mineral processing equipment. To learn more about mineral processing equipment like the Knelson™ and Falcon gravity concentrators, contact the experts at Sepro today.