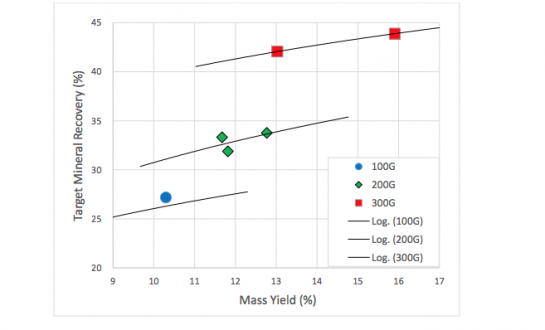 There is no controversy around the fact that mineral processing keeps getting harder and harder. Mineral deposits are getting more challenging and complex as mining companies are forced to bring new, low quality mines into production and try to squeeze as much as they can out of the long-neglected nether regions of existing ore bodies. Increasingly there is also a mandate to get more out of each tonne of ore processed and the focus often falls on fine (-75 micron) and ultra-fine (-38 micron) particles that historically might have been sent straight to the tailings dam.

Why send these particles straight to the tailings dam? There are several problems that fine and ultra-fine particles can cause depending on the process. In gold leaching operations they can cause carbon fouling or interfere with Merrill-Crowe. Fines are notorious for being difficult to selectively float as well as degrading the selective flotation of coarser particles when they are intermixed. Filtration capacity is dramatically decreased when fines are present. With the exception of cyanide leaching for gold, fine and ultra-fines have traditionally proven to be very difficult to selectively recovery. Combining the process issues with challenges in selective recovery, many mines simply make the decision to remove the fines early in the process and send them straight to tailings. In fact, we have seen tin, tungsten and tantalum mines reject more than 10% of the target mineral in slime reject streams.

Why has the recovery of fine and ultra-fine particles been so difficult? Cyanide’s selective affinity for gold has made gold leaching relatively easy along the entire particle size spectrum. Most other metals do not have the same luxury and require extensive preconcentration before acid leaching and solvent extraction become practical. Tin, tungsten, tantalum and chrome minerals cannot be economically leached at a large scale, typically leaving flotation and gravity concentration as the only viable alternatives. Further, many of these minerals are often very friable and break down into ultra-fine particles during milling. These ultra-fine particles typically make flotation unattractive and we are left with gravity concentration as the only viable option.

which we can use to generate the settling velocity:

We can see from the table above that huge strides were made as mineral centrifuges were developed. The second-generation centrifuges have the ability to generate huge G-forces and dramatically increase the settling velocity of even the finest particles. This effect has been observed directly in controlled laboratory experiments conducted on a Second-Generation Falcon gravity concentrator:

Sepro Mineral Systems has hundreds of second-generation centrifuges operating around the world in the form of the Falcon Semi-Batch (SB), Continuous (C), and Ultra-Fine (UF) gravity concentrators. The following example is from a major industrial metal producer who installed several Falcon Continuous and Ultra-Fine concentrators in a fine particle recovery circuit. This section of the plant was treating approximately 50tph with a P80 of 52 microns and with 73% of material classified as ultra-fine (< 38 micron).

While it is one thing to conduct controlled experiments in a laboratory environment, it was important to find out to what extent changes in G-force translate into real world recovery differences. Trials were conducted at different G forces in one of the variable speed Falcon Continuous concentrators and the results were analyzed.