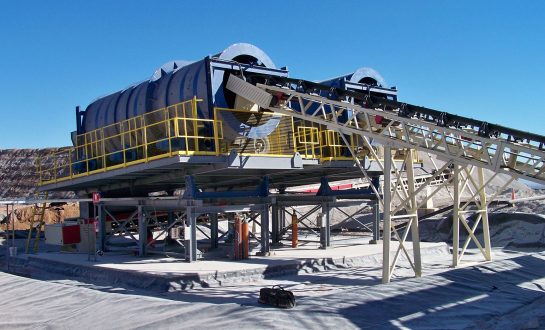 There are several devices that use gravity separation for the purpose of heavy mineral and gold recovery. From simple jigs to high G-force gravity centrifuges, knowing which one to use for optimal mineral processing can be complicated and difficult to understand. There are so many factors to consider when creating the ideal circuit; one critical element is the size of the particles you intend to recover.

Here is a brief rundown of some of the most common mineral separation processes and gravity separation devices mapped against the size of particles they are best suited to recover.

A sluice box is a long tray that is often placed in or alongside a river to recover coarse gold or other precious metals from alluvial deposits. The tray is open at both ends, with the upstream section flared open to increase the flow of water through the device. As the water flows, it passes over riffles, creating eddie currents in the water. This turbulence gives heavy particles, like gold, a chance to drop to the bottom of the tray, while lighter particles with no value pass through.

Mineral jigs use pulsing water to separate particles based on their densities. Once the feed enters the jig bed, pulses of water repeatedly thrust the particles upwards and let them settle back down, stratifying them according to their relative densities. Denser particles will settle on the bottom of the jig bed, while lighter particles settle on top and are discarded as tailings.

Both sluices and mineral jigs have been used for hundreds of years. They were both described in Agricola’s “De Re Metallica,” published in 1556.

Spiral concentrators can struggle to recover particles below 150 microns depending on the density and relative size of gangue particles.

A shaking table is essentially a large, rectangular, mechanized gold separation device. In one corner of the table, water is added to create a slurry. This mixture is fed to the shaking table and moves down the length of the table due to the reciprocating or “shaking” nature of the device. As the table shakes back and forth the valuable, higher density particles are guided across the riffled deck, while additional water washes the lighter gangue particles down the deck, perpendicular to the shaking motion. These dense, valuable minerals are concentrated at the end of the table while the less dense particles are sent off the side as tailings.

Shaking tables can have difficulty with very fine or flat-shaped particles.

The difference between a gravity concentrator and the other gravity separation devices previously discussed is the ability to increase the forces on the mineral particles that improve the particles’ settling in a water medium. Instead of relying on one G force (the force of gravity), a spinning device, like a centrifuge, can increase the forces applied to the particles. Low G-force concentrators use a force under 100Gs to recover particles down to about 30 microns in size.

The higher the G-force, the smaller the minerals you can recover with a given technology. All of the Falcon Gravity Concentrators are high G-Force devices that achieve forces from 100-600Gs. When these forces are applied to a mineral feed, particles as fine as  3 microns in size can be selectively recovered. The most powerful of the Falcon series of concentrators is the Falcon UF which specializes in recovering ultra-fine particles of tin, tantalum, tungsten and gold.

Particle size is only one factor to consider when creating a mineral recovery circuit. To speak with an expert about optimizing the recovery of your current or future project, speak with a Sepro gravity separation specialist. They will be able to help you create the ideal path for mineral recovery.