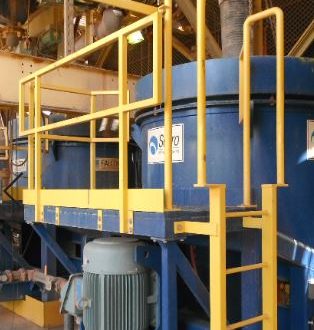 Let’s look next at the recovery efficiency of the gravity circuit. So here we’ve got a couple of factors. The paper indicates generally gravity concentrators operate with relatively low stage recoveries. Now this is accurate, but this is by – I’m not going to say “by design”, but intentionally based on the operation. So we can make a gravity concentrator very, very efficient by – let’s elaborate.

Say we’ve got a gravity concentrator here. If we keep the throughput of the machine low, and we have a very thin film going up the wall, we can get quite high single-stage efficiency and recovery in a single pass. However, in grinding circuits we tend to just hammer the capacity of these things. So we’ve got a huge film thickness, efficiency goes down, but overall gold unit production goes up because the throughput is increasing faster. Throughput is going up way faster than recovery is going down. So overall the gold units produced go up and as long as the cyclone is operating efficiently, because the cyclone’s returning the gold back to the circuit, it doesn’t matter so much that the overall recovery is low because we’re keeping the gold in the circuit with our very efficient cyclones, right?

However, if we’re treating a large portion of it, then there’s less opportunity for that cyclone efficiency to impact it. So just based on the reality of circuit operation, this is one of the factors that would lead somebody to install more gravity capacity rather than less, especially if there’s a lot of GRG in the circuit to try to narrow this gap and just make sure that GRG is maximized.

If you found this video interesting, please visit minerals.seprosystems.com to find the extended video series, as well as additional shorter clips addressing specific points around gold recovery for milling circuits. Thanks very much for watching.