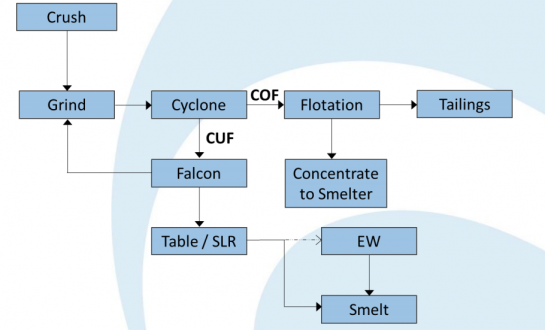 Gold recovery is a crucial part of the mining industry. Gold can be found in almost everything we see and touch; there are several important industrial uses for gold in electronics, dentistry, and aerospace; however, almost 80% of gold ends up being used for jewelry. While jewelry is the end of the road for most mined gold, there are many ways it occurs in nature. These different types of occurrences can impact the processes used for gold recovery.

In nature, gold occurs primarily as a native metal often alloyed with silver, copper, and mercury to varying extents. Native gold occurrences vary widely in particle size and mineral association. Gold deposits can be classified into two primary classes: placer, where the gold has already been liberated from the host rock by natural weathering, typically by water erosion; and hard rock (or lode), where the gold is still locked within the host rock.

Placer deposits contain gold that has been liberated and preconcentrated by natural weathering forces. Placer deposits typically consist of gravels, sands or laterites that can be mined easily without the need for blasting. The gold in placer deposits is often coarse, fully liberated and easily recovered by traditional gravity concentration techniques without any crushing or grinding.

Hard rock or lode deposits share a common trait: the gold is locked or occluded in the surrounding rock matrix where crushing and often grinding is required to liberate it. Hard rock gold deposits can be further classified into three sub classes: free milling, sulfide associated and refractory.

Gold ore is considered free-milling when over 90% of the gold can be recovered by a conventional gravity-cyanidation process with low reagent consumptions at a grind size of 80% passing 75 µm. Some examples of free-milling gold ores include quartz-veined deposits and oxidized ores.

Gold often occurs in close association with sulfide minerals such as arsenopyrite, pyrite and chalcopyrite. Sulfide-associated gold is often very fine in nature and difficult to separate from the sulfides.

A refractory gold ore can be defined as any ore that responds poorly to a conventional gravitycyanidation process with examples often including copper porphyry, complex sulfides, arsenopyrite and lead-zinc associations. There are several factors that can render an ore refractory. Ultra-fine disseminated gold particles can be trapped within the mineral matrix, even at fine grind sizes.

The ore can contain highly reactive minerals that consume free cyanide or oxygen. In addition, the ore can contain preg-robbing elements such as organic carbon that will re-adsorb the dissolved gold as it is leached. While the factors that make an ore refractory are varied, a common trait is requiring some sort of pre-treatment before being economically recovered by conventional cyanidation.

Finally, there are some minerals in which non-native gold occurs as a chemically bound solid solution with other elements. These relatively rare minerals include calaverite, sylvanite, maldonite and aurostibnite and make up a small fraction of global gold production.

The most cost-effective solutions for gold recovery from placer deposits use the principles of gravity concentration. In the case of sand or gravel type placer deposits, the material is screened to remove large rocks or boulders; the screen undersize is processed using a sluice or jig. In the case of placer deposits with a high clay content, a scrubber or trommel screen is typically used to separate the gold bearing sands from the clays ahead of the gravity units. The use of a trommel screen can result in fine gold being lost with clay; industry best practice is to use a rotary scrubber followed by a horizontal vibrating screen for maximum washing and screening efficiency.

If a significant portion of gold is fine (<300 µm), a high G-Force centrifugal concentrator can be used to improve recovery.

In the case of low grade (< 1 g/t) free-milling gold deposits, the ore is often crushed and heap leached. While the recoveries are typically lower than what would be obtained with a conventional gravity cyanidation flowsheet, the savings in CAPEX and grinding costs often justify this route. When clays or fine particles are present, the use of an agglomeration drum is necessary to prevent impenetrable dead zones in the heap.

Free-milling gold ores contain gold particles that can be liberated by grinding and are economically recoverable using traditional processing technologies.

A typical flowsheet for a hard rock free-milling gold ore is presented on the next page in Figure 1:

Blasted rocks from the mine are crushed to less than one inch (25 mm) before being fed to a ball or SAG mill. The discharge from the mill is pumped to a cyclone for classification. Hydrocyclones separate the particles based on their size and density with the fine, light particles reporting to the cyclone overflow (COF) and the coarser and denser particles reporting to the cyclone underflow (CUF) for further grinding.

Eventually, the ore is ground fine enough (typically in the range of 75-250 µm P80) and reports to the cyclone overflow. From there, the fine gold particles that have reported to the cyclone overflow, are extracted through a cyanide leaching and carbon adsorption process. A high-grade gold solution is then produced for electrowinning which is followed by smelting to create doré bars. Doré is a semi-pure alloy of gold and silver.

Gold by nature is very dense (19.3x denser than water and 7.3x denser than quartz) and malleable, causing it to grind slowly. These properties cause gold particles to preferentially report to the cyclone underflow and accumulate in the grinding circuit over time. In order to take advantage of gold’s preferential deportment to the cyclone underflow, the installation of a gravity concentrator to treat a portion (10-100%) of this stream can lead to a large benefit at a relatively low throughput and capital cost.

The high-grade concentrates from the primary gravity concentrator have traditionally been upgraded with a shaking table before being smelted and poured into doré bars. In recent years, intensive leaching of the gravity concentrate has become the preferred process option because of increased recoveries, improved security and lower safety concerns with modern equipment. The high-grade leach solution from the intensive leach reactor is electrowon and smelted similar to the gold from the primary leaching circuit.

Other benefits of installing a gravity concentrator within the grinding circuit include:

• Increase in overall recovery – A rule of thumb is for every 10% recovery by gravity, an increase of 1% in overall plant recovery can be expected

• Reduction in leach circuit CAPEX – By recovering the coarse, slow-leaching gold particles in the gravity circuit, the retention time and thus the size of the leach circuit, can be significantly reduced (alternatively more tons can be processed by the same size leach circuit).

Note: In some cases, if the gravity recoveries are high enough, the leach circuit can be eliminated all together.

• Reduction in reagent consumption – By lowering the feed grade to the leach circuit, the amount of cyanide and other reagents required can be reduced by as much as 70%.

• Less gold inventory lock-up – Gold’s high density makes it likely to settle out and accumulate in pump boxes and behind mill liners; by removing the gold as soon as it is liberated the gold lockup is significantly reduced and security is improved.

Gold is often associated with many sulfide minerals including arsenopyrite, pyrite, chalcopyrite and galena. Often a portion of the sulfide-associated gold can be considered free milling while the remainder is occluded or very finely disseminated within the sulfide matrix.

The crushing, grinding and gravity portion of this process is essentially the same as the free-milling process discussed above. Instead of cyanide leaching of the cyclone overflow, the gold and sulfide minerals are recovered by flotation. The particles in the cyclone overflow are mixed with chemical reagents to render the surfaces of the gold-containing sulfide minerals hydrophobic (metallic gold is naturally hydrophobic). Froth flotation cells then aggressively bubble air through the slurry. The air bubbles attach to the hydrophobic particles in the slurry and float them to the surface creating a mineral froth at the top of the flotation cell. This concentrated mineral froth is then collected from the surface of the flotation cell.

Typically, this concentrate contains a mixture of gold along with other valuable elements found in sulfide minerals such as copper, lead, zinc, etc. The bulk concentrate is most often filtered and sold to a smelter for further refining. In some cases, the flotation concentrates are processed further to produce bullion – this will be discussed in the next section.
While gold is naturally hydrophobic and thus amenable to flotation in the particle size range of 75-300 µm, very fine or very coarse gold does not respond well. Along with the benefits of lower CAPEX and reagent consumption mentioned previously, this can make the addition of a gravity circuit even more critical as it will prevent overgrinding of gold and capture any coarse particles before they report to the flotation circuit.

Any ore that is not readily amenable to recovery by conventional cyanide leaching at a reasonable grind size can be considered refractory. The three primary factors that cause gold ores to be refractory are:

• Chemical Interference – This occurs when there are minerals in the ore that consume large quantities of cyanide or oxygen.

• Preg-robbing – When the ore contains graphite or other carbonaceous matter; the gold, which often leaches well into solution, is pulled out of the leach solution by the carbonaceous material.

Each of the factors that result in an ore being refractory require a pre-treatment step before the ore can be treated by a conventional cyanidation leach process.

Physical encapsulation can be overcome by ultra-fine grinding; however, this is often not economically viable. If the gold is encapsulated in sulfides, oxidation of the sulfide minerals by roasting, pressure oxidation or bio-oxidation can be employed.

Various minerals can interfere with the leaching process by consuming cyanide or dissolved oxygen. In the case of pyrrhotite, a notorious oxygen consumer, pre-aeration of the leach slurry before cyanide addition can passivate the sulfide mineral and allow the leach to proceed normally. Both sulfide and oxide copper minerals can be consumers of cyanide. In the case of native copper or oxide copper minerals, sulfuric acid leaching can remove the copper prior to cyanidation.

Sulfide minerals that consume cyanide are typically preconcentrated by flotation before being oxidized using roasting, pressure oxidation or bio-oxidation.

Typically, preg-robbing carbon is managed in one of five ways:

• Carbon in Leach (CIL) – Adding activated carbon (with a much higher adsorptive capacity than natural carbonaceous material) during the leaching process.

• Roasting – Burning off the carbon content eliminates the preg-robbing effects but can be costly to treat the whole ore.

• Blanking – Chemicals such as kerosene or chlorine can deactivate the carbon surfaces and minimize preg-robbing; chlorination is typically more effective but much more expensive than kerosene.

• Pre-flotation – Using froth flotation to float out the naturally hydrophobic carbon ahead of the leaching process.

When it comes to the gold recovery process, there is no “one size fits all”, but there are plenty of options and solutions. While the correct process depends on the type of gold ore you’re working with and any challenges your project may face – there are many experts who are ready to help you figure those steps out.

For more information, and to get prepared for your next project, contact one of Sepro’s gold recovery equipment experts today for an in-depth consultation.