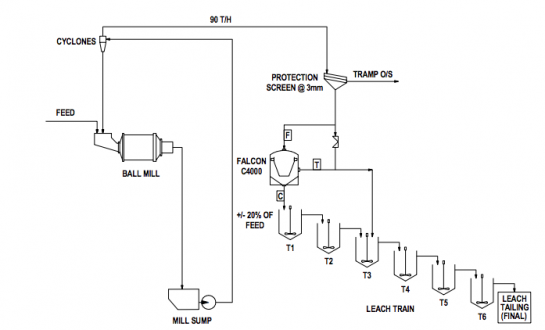 Although great progress has been made, the ability to produce directly smeltable concentrates still remains elusive. Even without this ability, centrifugal concentrators are finding widening applications in precious metal concentration:

Enhanced gravity concentration technology has largely replaced jigging as the technology of choice in precious metal grinding circuits worldwide. The benefits of using a centrifugal field to concentrate both coarse and fine gold are well documented but the placement of these machines within grinding circuits is still evolving. Conventional wisdom dictates that the best location for enhanced gravity machines is cyclone underflow on account of the elevated grade found in this stream when compared to cyclone feed or overflow. Plant operating experience at both large and small scale indicates that there are compelling arguments to place ENHANCED GRAVITY MACHINES on cyclone feed instead. At least two new plants, presently in the detailed design stage will incorporate gravity circuits that treat mill discharge or cyclone feed, Teck Cominco’s Pogo and Newcrest’s Telfer Expansion.

The current stream of choice for enhanced gravity concentration within grinding circuits is cyclone underflow although recent information indicates a swing toward cyclone feed. Here are some of the arguments for treating a portion of cyclone underflow:

Desliming ahead of gravity concentration devices that operate at 1 G or less is a well-proven technique. It has been assumed that providing a deslimed feed to enhanced gravity concentrating machines will also improve stage recovery.

In theory, downstream processes such as froth flotation and cyanide leaching will recover all of the free precious metal that escapes from grinding circuits through cyclone overflows. In reality, there are losses from circuit upsets and other causes.

The thinking is that the size distribution of the target metal will be coarser in cyclone underflow as opposed to cyclone feed and the fine particles in cyclone feed can’t be recovered gravimetrically anyway.

In light of development of enhanced gravity concentration devices, the foregoing maxims should be revisited.

There is a trend in plant design toward treating cyclone feed for these reasons:

Placing the enhanced gravity concentrators on cyclone feed means that the head against which the cyclone feed pumps must work can be substantially reduced.

For example, the Alumbrera Mine in Argentina lowered their cyclone clusters by 5 meters in 2001 in order to reduce the cyclone feed pump head and associated wear. The original elevation of the cyclones was selected so that a portion of the underflow could flow by gravity to vibrating screens and hence to gravity concentrators. The reduction in cyclone elevation meant that the gravity section could no longer be fed by gravity. The alternatives were to install dedicated pumping capacity or use a spigot from the pressurized cyclone feed distributor to feed a stand alone cyclone mounted over the gravity concentrator feed screens. This system was unreliable and costly to maintain. In mid 2002 a test was conducted by removing the cyclone and feeding cyclone feed onto the screen. This change allowed more material to be fed to the gravity concentrators at a greater size distribution and lower percent solids. The positive effect of this trial was improved gravity gold production and in addition, eliminated costs of maintaining the additional cyclone. The trial has been extended to all four gravity concentrator feed screens.

The down side of the trial is the gravity concentrator tailings are presently introduced to the feed end of the ball mills. At times, Alumbrera’s throughput is ball mill limited so putting additional load on this portion of the circuit reduces plant capacity. In order to alleviate this condition, Alumbrera is presently experimenting with ‘borrowing’ mill discharge by means of a dedicated pump connected to the cyclone feed pump box. The borrowed material is reintroduced to the pump box so there is no effect on mill throughput.

A number of configurations of this concept are presently being evaluated in Alumbrera’s recently commissioned third grinding line. If successful, improvements in throughput and grinding efficiency as well as gold recovery will be achieved at Alumbrera.

Plant experience indicates that higher gold production can be obtained by placing the enhanced gravity concentrators on cyclone feed. Speculation on the reason for the improvement includes:

Treating cyclone feed with its higher slime content improves the efficiency of enhanced gravity concentration devices. The slime may act as a quasi-heavy medium allowing the high-density precious metal particles to become better separated from the lower density gangue particles. Dr. André Laplante of McGill University has reported that the performance of enhanced gravity concentration machines can be improved by adding silica flour to the incoming pulp. Efficiency improvements have also been noted in the few plants that have switched the source of feed for their gravity circuit from underflow to feed:

Here are some operations that have successfully incorporated cyclone feed from the start:

With concentrating fields up to 300 G’s now available, particles that were previously thought to be unrecoverable gravimetrically are being recovered at more and more plants. Treating cyclone underflow means that many fine particles do not ever go through the gravity concentration circuit. With cyclone feed, there is at least a possibility that some of these fines will be recovered. Where gravity recovery is deemed to be very important, the entire mill discharge can be treated to maximize metal production by gravity.

Enhanced gravity concentration machines recover gold that is easily lost on shaking tables. For this reason, batch-type centrifugal concentrators are seeing growing use as a scavenger for tables. Cadia reported a ±20% increase in gravity gold production after installing a Falcon on table tailings. The scavenger concentrate must be re-tabled.

Where a cyclone overflow or leach feed stream contains a slow-leaching dense mineral such as electrum or even free gold, it is possible to concentrate it using enhanced gravity concentration technology. The Falcon Concentrators Inc. Model “C” concentrator, for example, consumes little or no process water and can be set to produce virtually any desired mass pull to a concentrate or dense fraction. In addition, this fraction is highly dewatered as well as deslimed.

This technique was used successfully at Echo Bay’s Kettle River Mine. The operators reported an increase in production of approximately 3,000 ounces per year while maintaining cyanide consumption at pre-preconcentration levels. Daily throughput was approximately 2,000 Tons.

Newcrest Mining of Australia first introduced the use of enhanced gravity concentration to treat flash flotation concentrate at the 50,000 tpd Cadia Mine in Australia in 1997. Flash flotation concentrate is treated with a Falcon Concentrator and the resulting gravity concentrate is upgraded for smelting on a shaking table. Table tailings are scavenged with a second smaller Falcon. The performance of this circuit was the subject of a Paper by Robert Dunne of Newcrest and André Laplante at the 2002 CMP meeting. The circuit produces upwards of 40,000 ounces per annum.

Flotation concentrates of copper are being successfully treated with Falcon Concentrators for removal of fine, free gold. The benefits to operators that have installed Falcon’s for this duty enjoy these benefits:

If the gold recovered from the copper concentrate is smelted into doré at site and then shipped to a refinery, for example, payment can be almost immediate.

Gold shipped as doré will attract almost 100% of the current spot price for the contained gold whereas gold contained in concentrate attracts less, typically by 3-5%. Depending on the character of the ore, payback may be very rapid.

Operations that ship gold in base metal concentrate usually face an ongoing dispute with the receiving smelter over gold content, with the smelter usually coming out on top. Removing the Falcon-recoverable free gold before shipment makes it much more homogeneous and thus easier to sample accurately for payment purposes. In one case that came to Falcon’s attention, the size of the discrepancy between what the Mine thought it was sending and what the smelter was willing to pay for amounted to more than 1,000,000 USD.

If the Falcon Concentrator is installed to treat the rougher copper concentrate or within the regrind circuit as opposed to the final product, there is a possibility that overall recovery can be increased by reducing losses to cleaner tailings. This can only be assessed with a plant-scale installation.

Here are some operations that are either using or considering enhanced gravity concentration of gold from copper concentrates:

For more than a hundred years, enhanced gravity concentration of precious metals has been the goal of many an equipment developer, but most successful commercial applications have appeared only recently, say within the last 15 years or so. Enhanced gravity concentration is here to stay and will see expanded use as the equipment gets better, and more importantly, better understood. As is the trend in other aspects of mineral processing, unit capacity will increase as well as the degree of automation and process control.

As environmental regulations and permitting requirements become more stringent, enhanced gravity concentration may become the only economically viable technology for some ore deposits.