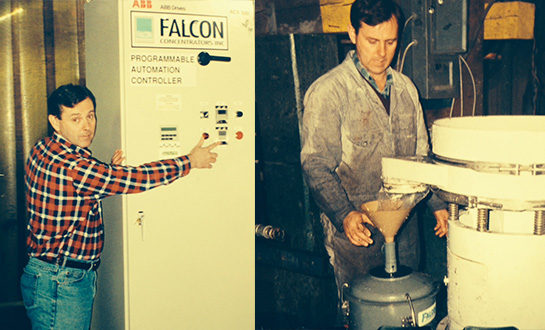 Gravity separation equipment has been used for centuries in the mining industry but was often impractical or too inefficient for modern mineral recovery projects until the late 20th century. The physical laws behind the concepts were well understood but engineering had to catch up with the science. This included the improved equipment design that allowed higher forces, understanding slurry flow, rheology, and the effects of particle shape. Only in the last couple of decades has engineering allowed gravity separation equipment to become a necessity in today’s mineral processing plants.

The Falcon line of gravity concentrators is the result of Sepro’s heavy investment in gravity separation technology. The three Falcon models – SB, C, and UF – can improve the efficiency of mineral recovery in a wide range of minerals. It took decades to develop the tech used in these machines, and we’re still improving them today. Here’s a little history of how the Falcons came to be.

In the early 80s, Steve McAlister (the founder of Falcon Concentrators Inc. and current Sepro Systems Director and board member) played with the idea of gravity separation technology. He was aware of fine gold particles in the sand/slime streams of commercial gravel operations that drew their feed from old river deposits. He set out with a goal to recover these fine gold particles.

Mercury was not an option and modern sluices did not work for fine gold particles. His idea was to wrap a sluice around a vertical axis and use enhanced gravity to sharpen the separation, resulting in an inverted cone. The horizontal component of the centrifugal force would be used for separation while the vertical component would become the hydraulic downhill force. A short cylindrical section and a small lip formed a single riffle to trap the gold particles. Inserting this separator in a mineral recovery circuit would not alter the water balance.

This first gravity concentrator prototype was tested in 1981. The design was refined through trial and error over several years and produced most of the present details like an impeller to accelerate the feed to the walls, a 14 degree cone angle, and rubber surfaces.

Blackdome Mines in 1986 became the first commercial mine to use an early version of a Falcon Gravity Concentrator.

Overall gold recovery improved by 6% with the addition of gravity separation equipment.

In 1989, the Johnny Mountain Mine became the first location that used a Falcon Gravity Concentrator to handle the entire throughput of their mill plus recycled float cleaner tails.

Data from the Johnny Mountain Mine was collected to improve the Falcon Gravity concentrator design. This spurred the development of the SB, C, and UF models.

In 1935, a type of gravity separator was patented by A. N. MacNicol that used ribs to divide its inner cone into a series of slots. A water jacket and connecting holes were used to inject water and elutriate a bed of material in each. This design allows heavier minerals to be preferentially retained, displacing lighter ones.

The issue with the Falcon B model was that it performed poorly with coarse feed, which is where MacNicol’s device excelled. The next goal was to develop a gravity concentrator that could recover both fine and coarse minerals.

In 1994, the Falcon SB Gravity Concentrator came to fruition, combining the technologies from the Falcon B model and MacNicol’s device. The modern version of the Falcon SB is the most advanced piece of gravity separation equipment on the market today.

Each has its own unique applications in mineral processing. To learn more about our Falcon Gravity Concentrators and other gravity separation equipment, contact Sepro Minerals today.