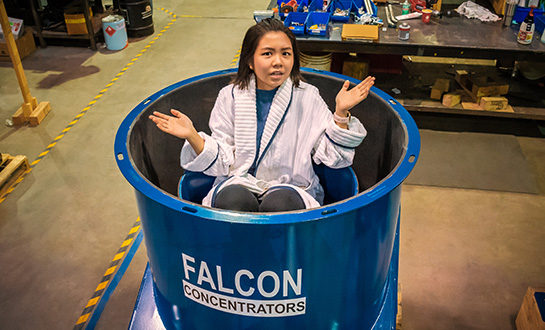 Falcon Gravity Concentrators use high G-forces to perform gravity separation. The Falcon UF, the most powerful of our three models, can produce force as high as 600Gs! That’s more force than a Formula One car accelerating, a space shuttle launching, and much, much more than what the human body can withstand.

With this amount of force, particles finer than 10 microns can be separated and recovered from other particles. But this raises the question: how many G-forces can the human body withstand? Could you hop inside gravity separation equipment (like our Falcon UF Concentrator), take a spin like you would on the Gravitron at your local amusement park, and walk away? Let’s find out!

G-force stands for gravitational force. It’s the force that acts on your body as a result of acceleration or gravity that causes the perception of weight. When standing on Earth, you experience a constant force of 1G, which accelerates you at 9.8m/s2. If you’ve ever been on a roller coaster, or accelerated quickly in your car, that feeling of being pressed into your seat is what we’re talking about. The faster your acceleration, the more G-force is applied.

Humans can experience G-forces in six different ways: side to side, front to back, head to toe, or vice versa (e.g. toe to head). Humans are much more resilient to G-forces that are applied horizontally, that is, forces applied in a way that runs perpendicular to our spines, rather than vertically (head to toe).

How Much G-Force Can Humans Tolerate?

There are a number of factors that affect the human body’s tolerance of G-force. We’ve already mentioned force direction (whether it’s horizontal or vertical), but the strength of the G-force and the amount of time it’s applied also play a role in how much our bodies can withstand.

Vertical Gs are experienced by pilots as they come into and out of sharp turns in flight. Pilots typically experience positive Gs, where blood rushes away from the head, and pools in the feet. An average person can handle up to 5Gs this way before becoming unconscious. If the Gs don’t subside and blood cannot return to the head in a timely manner, a person could potentially die! Our hearts are not strong enough to counteract 5Gs of force.

Fighter pilots are able to withstand upward of 9Gs thanks to training and the help of special “g-suits” that force blood to stay in the upper half of their bodies.

Negative Gs drive blood toward a person’s head. Humans can only tolerate -2 to -3Gs in this orientation, and risk experiencing a “red out.” This is when vision is reddened due to blood vessels in the eye breaking and additional blood pooling into the field of vision. Yikes!

Humans Can Tolerate Horizontal G-Forces Much Better Than Vertical Ones

In the 1940s, John Stapp performed some experiments of G-force on the human body, or rather, his own body. He built a rocket-powered sled that would gain speed and then decelerate suddenly to apply horizontal G-forces to his body.

In one attempt, he clocked in at Mach 0.9, or 1017km/h and came to a sudden stop in just over one second. His body experienced over 46Gs with no adverse long-term effects. He lived to be 89 years old.

Average humans have been shown to tolerate forces of 20Gs for less than ten seconds, 10Gs for about a minute, and 6Gs for 10 minutes in a horizontal orientation.

Sepro’s gravity separation equipment applies forces of 50 to 600Gs! It’s safe to say that not even fighter pilots could withstand a rinse and run cycle.

Gravity concentrators are powerful enough to recover fine mineral particles like gold from grinding circuits. With their amount of power, we don’t recommend putting a person inside. To speak with someone about our gravity concentrators or range of gravity separation equipment, contact the experts at Sepro Mineral Systems.